Alright! Here we go with another release of AdonisJS. This is a big one in terms of the development workflow you will be using moving forward.

Before we dive into the specifics and the motivation behind the changes. Let's quickly talk about the steps you will have to take to upgrade your application.

I am not a big fan of build tools or adding an additional step to prepare my code for getting executed. However, when using Typescript there is no way to escape the process of compiling Typescript to JavaScript since v8 is meant to run Javascript only.

Initially, we did add a build step in which we compile Typescript to JavaScript before starting the development server.

In the following screenshot, the first five steps involve compiling the code to Javascript and copying some files to the build folder to start the HTTP server.

Even though the process seems logical, it has a lot of rough edges that will bite you once in a while. Many users created GitHub discussion threads lately expressing:

All this confusion is a result of a stale build folder and you have to make sure that one process is always running to keep the build output up to date.

Let's do something better

I have been banging my head lately to find some alternative which feels more natural and intuitive over this additional build step, and voila there is ts-node.

Ts-Node is a library to run typescript code directly without transpiling it first. But, I decided to not use it and instead write my version of it for the following reasons.

Now that you are aware of the reasons for not using the ts-node, let's expand upon how in-memory compilation works and also the entire cache mechanism built to make subsequent runs faster.

So, if you combine the above two you can compile the typescript code on the fly. However, typescript does take some time to compile the code and this can make restarts slow. Let's visualize a standard development workflow.

On-disk caching is the only solution to avoid re-compiling the entire project after a single file change. The following are the steps we perform for caching.

The term ignore the cache is important here. Since we don't remove the old cache there is going to be a time when the cache will end taking a lot of disk space.

To counter that, we expose an API from the @adonisjs/require-ts module that the file watchers can use to clear the entire cache or remove a single file from it.

Finally, we end up with a development workflow that can run Typescript source code directly and uses cache for faster restarts.

We believe that validating the environment variable early in the lifecycle of running the application is a better approach instead of running an unstable system with in-correct or missing values.

To get started, create an env.ts file in the root of your application and paste the following code snippet inside it.

With the above file in place, AdonisJS will automatically load this file to perform the validations.

Since we are already performing the runtime validations, wouldn't it be great if we can also get IntelliSense for the validated environment variables? Well, we can:

Begin by creating a new file contracts/env.ts and paste the following code snippet inside it.

Now, you will get proper IntelliSense when using the Env module. 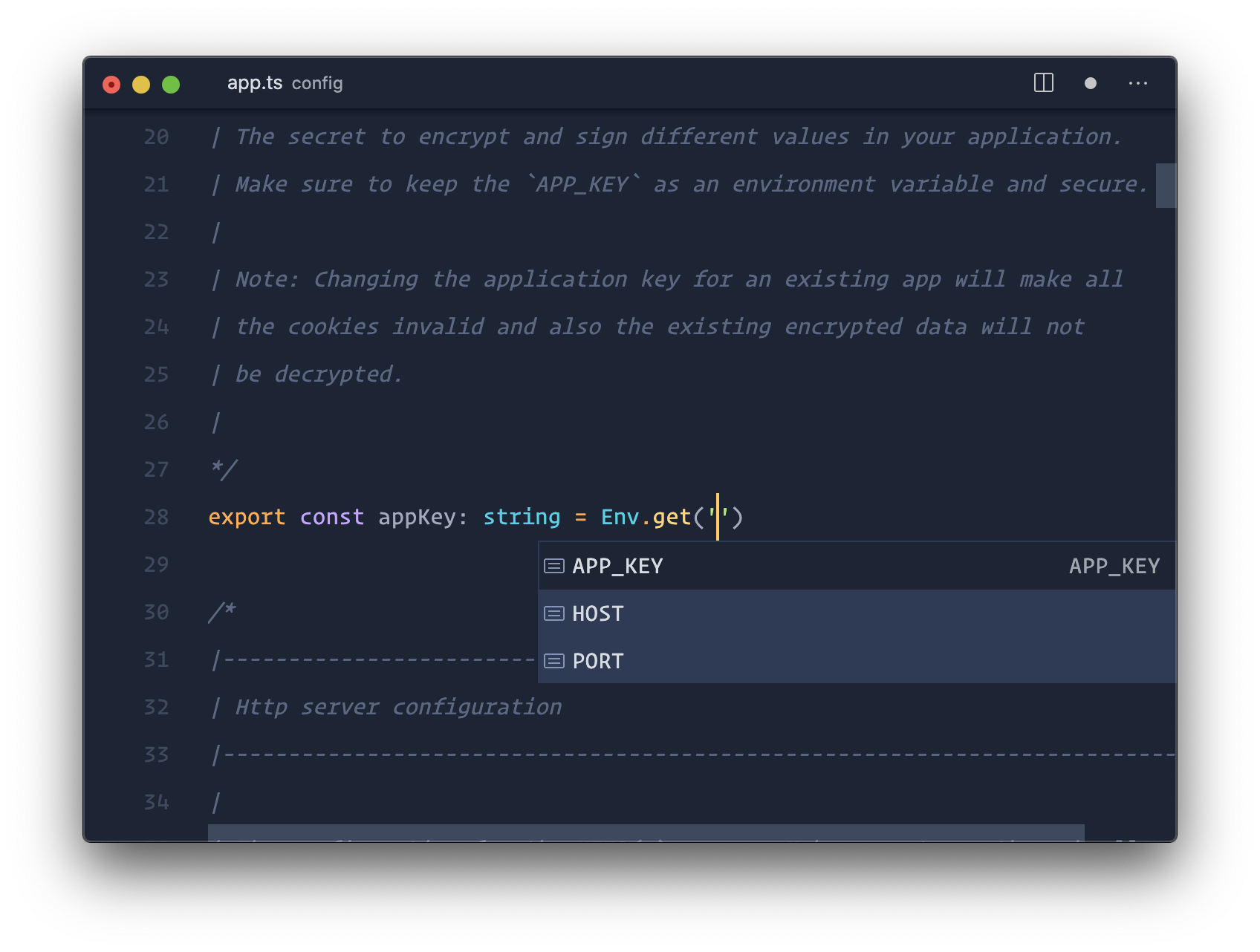 REPL stands read–eval–print loop, a way to quickly execute single-line inputs and return the result. Node.js also has its REPL and to give it try, you can open up your terminal, type node, and press enter.

Similar to the Node.js REPL, AdonisJS now also has its REPL with first-class primitives to let you interact with your application. To begin, install the @adonisjs/repl package from the registry.

Next, run the following command to set up the package.

That's all! Now you can run the node ace repl command to start the REPL session.

Projects setup to use Japa test runner also have to update the japaFile.ts file.

Checkout the following links to learn more about what's included in the release.