This guide covers the HTTP routing capabilities of the framework. By the end of this guide, you will know:

What are HTTP routes?

The users of your website or web application can visit different URL's like /, /about or /contact. In order to make these URLs work, you will have to define them as routes inside the start/routes.ts file.

The above example registers a total of following three URLS. Each one will respond with the route handler return value.

If you try to visit a different URL, for example: /blog, you will receive a 404 (Page not found) error.

You can define routes for different HTTP methods by calling the equivalent method names on the Route object.

The above mentioned methods only covers the commonly used HTTP methods. However, you can also define routes for any valid HTTP method.

Every route must have a corresponding handler to handle the request. Handlers can be inline closures or reference to a controller method.

The inline closures are functions, directly attached on the route definition. They are great for quickly testing out some code. However, we highly recommend keeping the routes file clean by using Controllers.

On the other hand, Controllers provides a great structure to your application by making you extract the code for handling requests to dedicated controller files. Make sure to read the guide on controllers for in-depth understanding.

Not every URL can be as simple as /about or /contact. Many URL's will need dynamic values in order to be functional. A great example of this is a blog or an e-commerce website, where you want to lookup database records for a given id.

Let's continue with the blog example and see how we can accept the blog post id as part of the url and then render the correct blog post.

Now, if you will visit the http://localhost:3333/posts/1, you will see the following message. 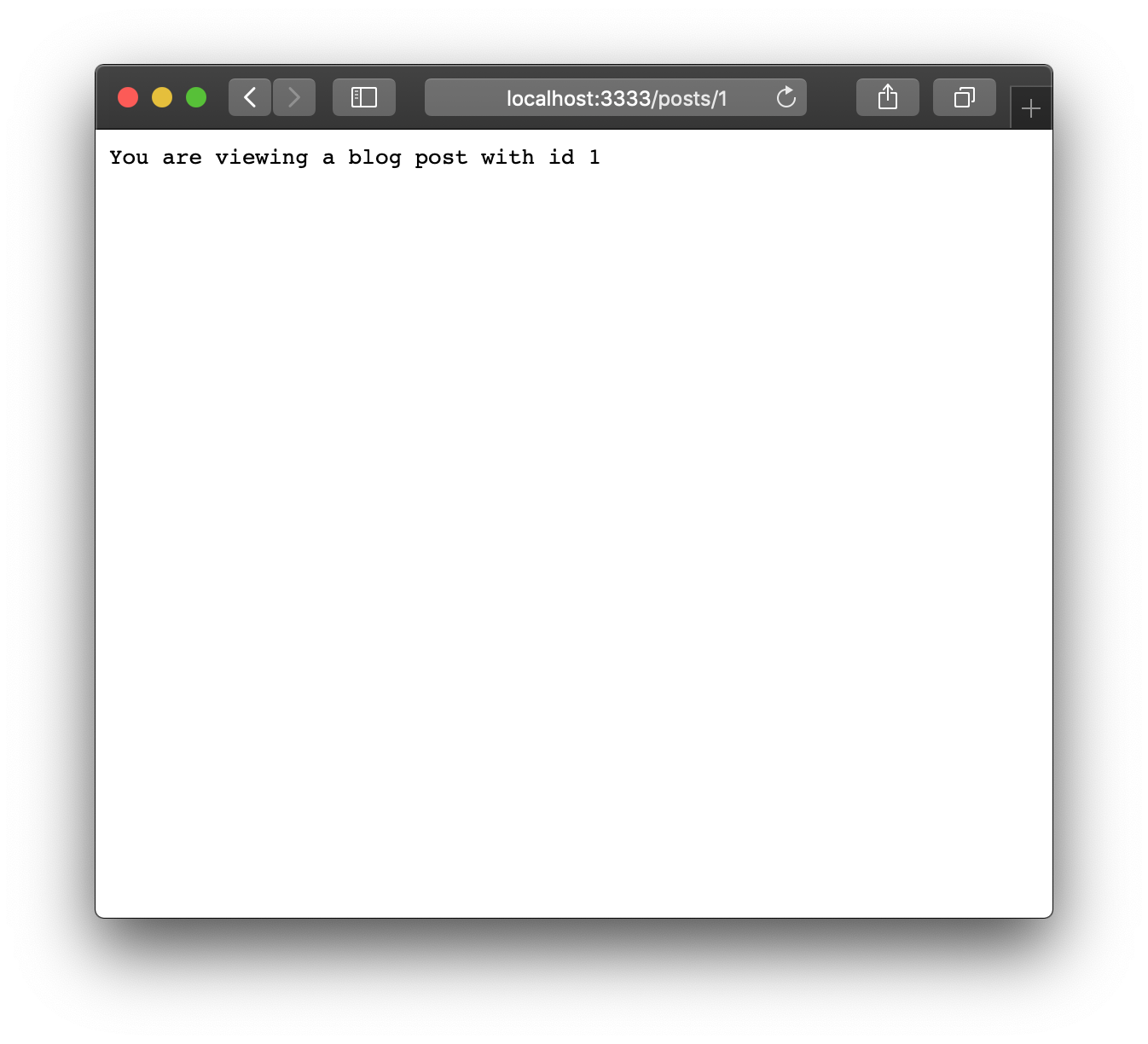 You can also mark parameters as optional by adding the ? suffix. Consider the following example:

The principles of REST provides a great way to map CRUD operations with HTTP methods without making the URL's verbose.

For example: The URL /posts can be used to view all the posts and also to create a new post, just by using the correct HTTP method.

Using the principles of REST, following are the routes to perform CRUD operations on blog posts.

Since, the above pattern is so popular and widely used. AdonisJS provides a shortcut to define all the RESTful routes using Route resources.

The Route.resource method registers the following routes along with the appropriate controller methods. 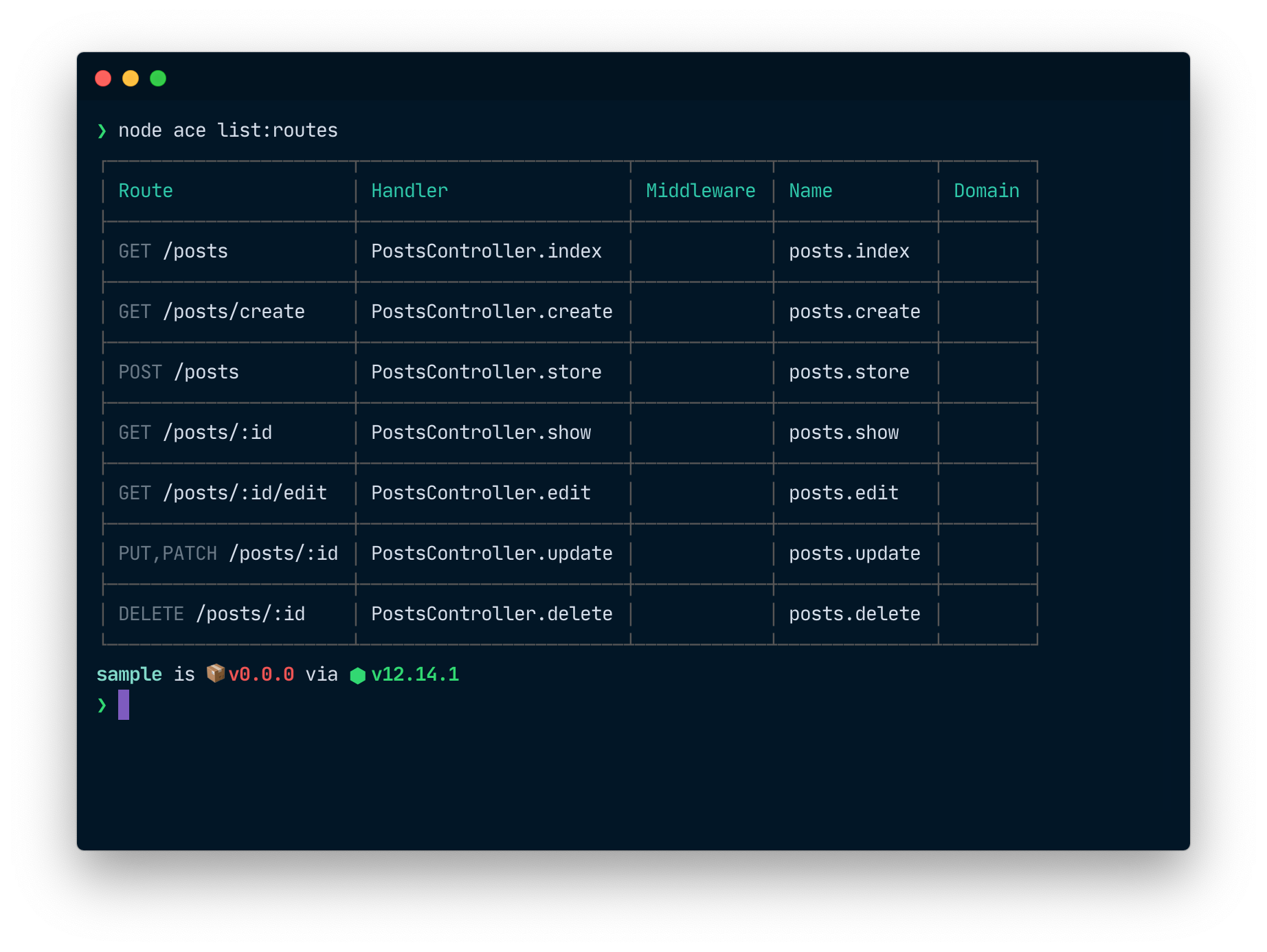 The Resourceful routes has two implications.

If you notice, the Route.resource method creates two extra routes.

However, when creating an API server, the routes to display forms are redundant and can be removed using the apiOnly method.

In many situations, you would want to prevent some of the resourceful routes from getting registered. For example: You decided to restrict the users of your blog from updating or deleting their comments and hence routes for the same are not required.

The opposite of except is the only method to whitelist selected routes.

The except and only methods takes an array of subset of route names to blacklist or whitelist. When both are applied together, the only method will win.

Nested resources are registered using the dot notation (.). Even though there is no technical limitation on the nesting level, it is recommended to avoid deeply nested resources.

The above example registers the following routes. The parent resource id gets prefixed with the resource name, ie: post_id. 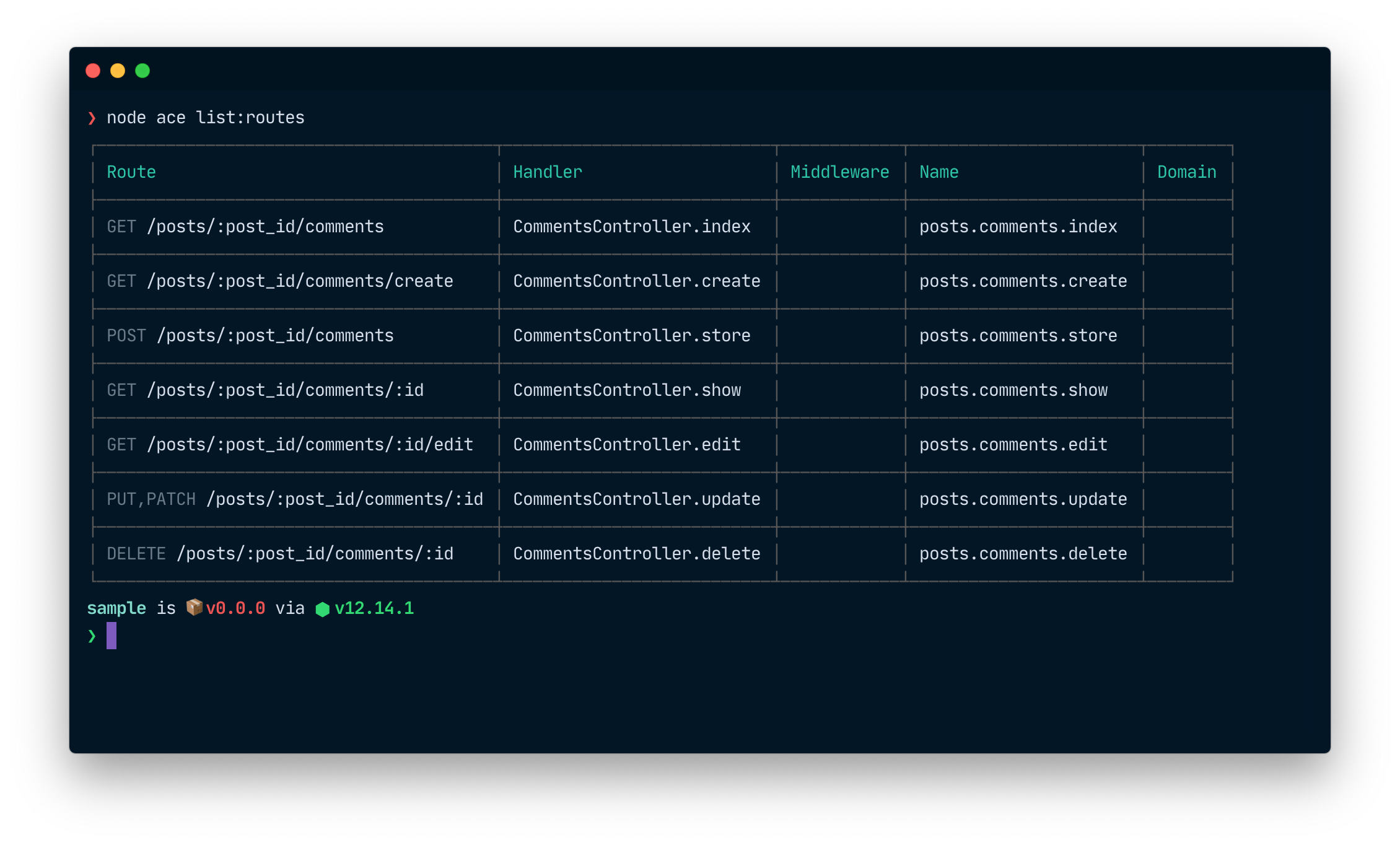 AdonisJs provides a great way to group multiple routes of similar nature and bulk configure them instead of re-defining same properties on every route.

A group is created by passing a closure to the Route.group method. Routes, declared inside the closure are part of the surrounding group.

You can also create nested groups and AdonisJS will merge or override properties based upon the behavior of the applied setting.

You can prefix the group routes URL using the .prefix method. For example: Adding /blog prefix to all blog related routes.

In case of nested groups, all prefixes will be applied starting from the outer to the inner groups. For example 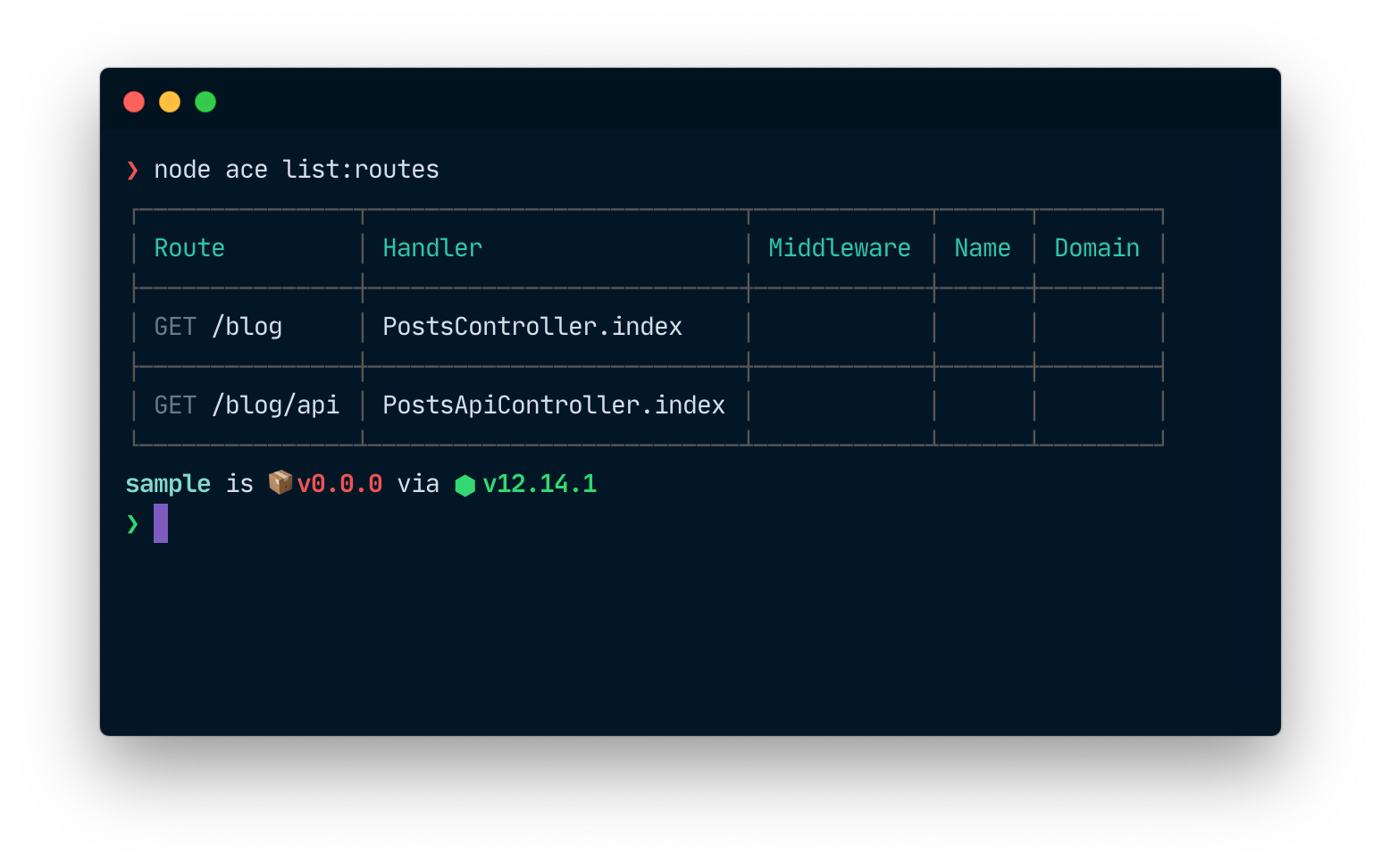 You can also define middleware, sub-domains and route names on a group of routes.

Middleware offers an API to execute a series of actions before a given HTTP request reaches the route handler.

AdonisJS provides two layers at which middleware can be executed.

This section focuses on the usage of Middleware with Routes. Make sure to read the dedicated guide on middleware to learn more about them.

You can add middleware to the routes using the middleware method, as shown below:

Just like Controllers, you can extract inline middleware functions to their own dedicated classes and keep your routes file clean and tidy.

Creating and using middleware classes involves an extra step of registering middleware aliases and then using the alias as an identifier on the route. The middleware guide covers the concept of aliases in depth.

You can also apply middleware to a group of routes. The group middleware will be executed before the middleware registered on individual routes.

In the above example, the auth middleware will executed before the postAuthor middleware.

The Route.resource method also exposes the API to register middleware on all or selected routes registered by a given resource.

When selectively applying middleware to certain routes, the object key is the name of the route and value is an array of middleware to apply.

AdonisJS makes it super easy to create multi domain applications. Using domains, you can restrict routes to be accessible only for a given domain.

When running your application, AdonisJS will make sure that routes defined inside the above group are only accessible by the blog.adonisjs.com domain.

You can also define dynamic parameters within the domain name. For example: Creating a multi-tenant app and accepting the tenant subdomain as part of the URL.

In the following route, you can access the tenant value from the subdomains object.

The routes are defined inside a single file ie. start/routes.ts, but they can be referenced across the application to generate URLs. For example:

Instead of hardcoding the form action inside HTML, you can make use of the route helper to generate a URL for you.

Currently, there is a problem with our code. If we were to change the route pattern /users/:id to something else, we will have to make the same change inside the template as well.

To overcome this problem, AdonisJS allows you to give unique names to your routes. When generating the URL, you can use the name instead of the route pattern.

The routes registered by the Route.resource method are automatically named after the resource name.

For example: The users resource will have the following names.

Similarly the nested resources will be named after the parent.child resource.

Using route groups, you can prefix the routes names for that given group. This is helpful, when you have similar routes outside the group and want to avoid name collisions. For example:

The above code will not work, since we have two identical resources, both having the same names. We can fix the issue by prefixing the resourceful routes names, declared inside the group. 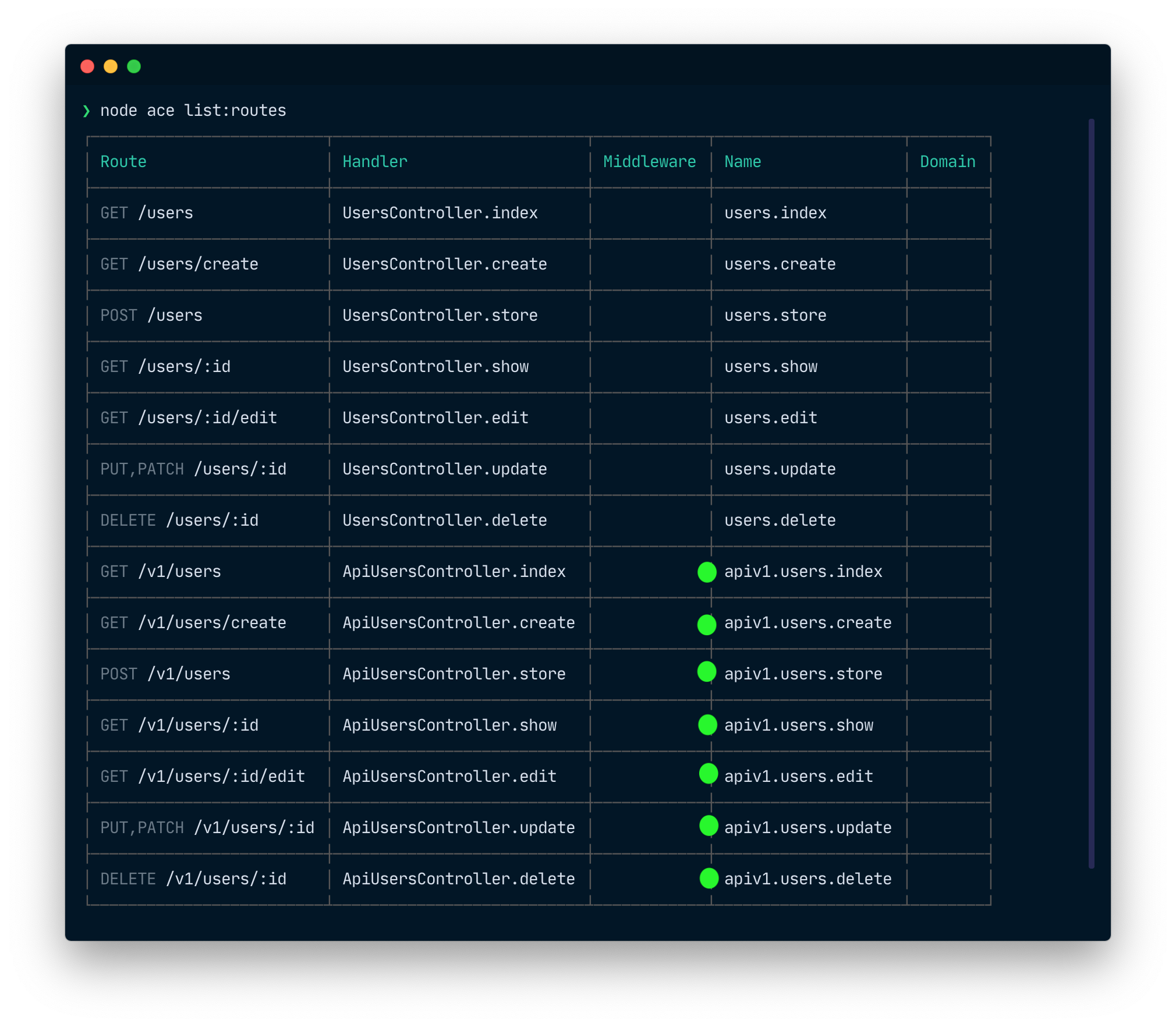